Is there any reason to buy a SATA III expansion card to run your new SATA III SSD if your MOBO only has SATA II?

So I have a shiny new Corsair Force GT 120GB SATA III drive and an old SATA II motherboard.

Last article I benchmarked the performance to see what kind of experience you get when running on your onboard sata II connectors.

This article is the part 2 where I am going to benchmark the relative performance with a SATA III expansion card to see if there is any point is spending the money on one.

It was a bit hard to track one down in Australia so I had to buy this second-hand off the overclockers australia forums, but I wanted this card for its x4 PCI-e v2.0 connection.

Details of the U3S6 here. 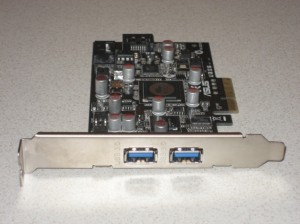 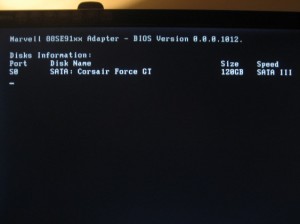 I decided to play it safe and rather than flash the bios and destroy the card I would start from scratch, benchmark it first. Later I will play and see if I can improve on stock performance results, buy flashing to later versions of the firmware.

At on OS software level I tested with 2 driver configurations:

with some interesting results..

The latest drivers are best found on station-drivers. It’s french but version numbers can be read easily, go to the bottom for the MV91xx drivers and firmware.

The U3S6 is therefore running in the x8 slot.

My original SATA II Benchmark score on SATA II was 480! I did this benchmark on day 1 of a clean Windows 7 install. Since then I have been using the computer for a few months and the drive is about 50% full so I benchmarked with AS SSD again.

I did numerous benchmarks with in multiple different driver and SATA configurations. The Read speed seemed to give consistent results across similar benchmarks but the write performance (particularly the 4K-64-Thrd) was a bit all over the place and seemed to influence heavily the overall score giving results between 395 and 450.

The following results are the best of each run: 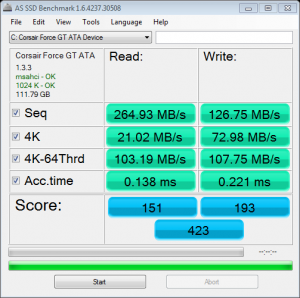 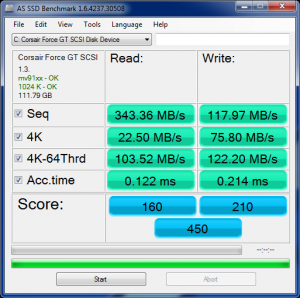 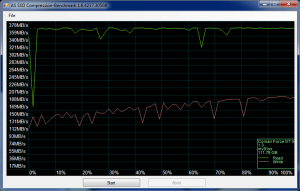 The U3S6 seems to have better sequential read of approx 340MB/s. This is only a 75MB/s improvement.

I noted that generally the benchmark results for the earlier 1.0.0.1036 driver were slightly better and more consistent than the later 1.2.0.1016 driver.

Also the Read performance was generally consistent but the 4k and 4k-64Thrd write times were up and down.

Given the fluctuations I also tried Crystal Disk mark which seemed to give similar results without the randomness. 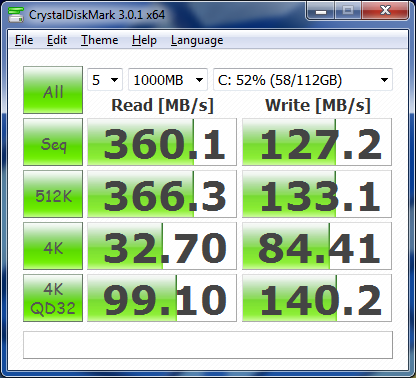 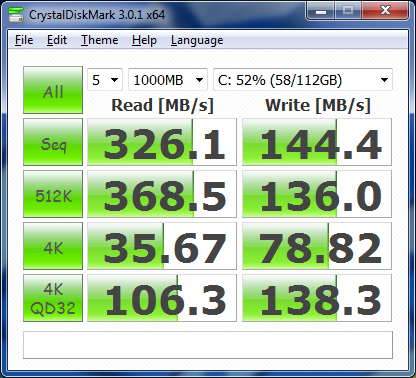 Same as last time, the benchmark recorded the time from when windows started loading after the POST screen, until a working desktop was available. This was identified as the time at which the Gadgets appeared on the desktop. This was split into 3 timing points 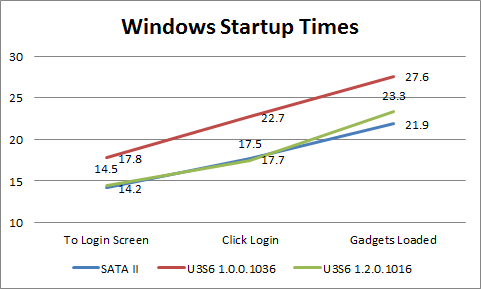 The fastest startup time was still SATA II and the 1.2.0.1016 driver made a difference but the 1.0.1036 was consistently a few seconds slower to boot.

I didn’t bother with the load time tests as I figured they would be comparable.

I did however run the Benchmarks for both Crysis and Crysis 2 in the various configurations, with some interesting results.

The results were almost identical. No change here.

The benchmark was run on DirectX 11 on the Times Square Map.

The most interesting thing here is that when the video card was being pushed by crysis 2, the PCIe channel appears to be compromised by the SSD drive running on the x8 port.

This can be seen in the poor fps on the two higher settings.

Just to see how the USB 3.0 worked I hooked up my Western Digital 1 TB external hard drive and did a 4.14GB and 15.5 GB file copy both up to and down from the External drive.

I have gotten around to flashing the Card. At first it felt like “flushing” not “flashing” as the firmwares I tried off “Station-Drivers” broke the card. After a few hours of flashing I finally got the driver working with Firmware revision 1028 “Firmware pour U3S6 Rev 0 (MV-9123) Version:1.0.0.1028) Mod by Daoud333”

So when I start it up I see the following

After some digging I found this spec document on the controller, Marvell 88SE91xx Product Brief. If you read this the spec fo the controller shows this..

The controller only supports a single x1 connection.

I feel a bit duped. I specifically got this card for its x4 connection, but given the fact the marvel controller only accepts a x1 connection the SATA will only ever be able to run at this speed. I have read other people suggest that the x4 is used to split the channel in half and use some of the x 4 bandwidth for the USB 3.0 controller, which would make sense but it seems like false advertising to me.

Overall I think if you are out of SATA ports on your PC and need a few more, then the card is OK as long as you are NOT using it for gaming.
The sequential read is slightly better but this is only a benchmark figure as it did not translate in the real world.
The only other nicety is the USB 3.0 which will come in handy in the future.

I think in the next few months The Marvel 92xx controllers
will start to appear and these may allow my SSD to run to its full potential as this supports PCIe x2.