So you want to create a windows form application. It needs to do the following:

This will walk you through the pattern for implementing this solution.

This as the name suggests is a thread of execution that runs in the background in the application leaving the UI thread to do what it is good at, UI rendering.

What is the background thread and how do I create one?

First of all lets create a visual studio solution. I am going to create an empty windows form application called WorkerUtility. I will place the following controls on it. 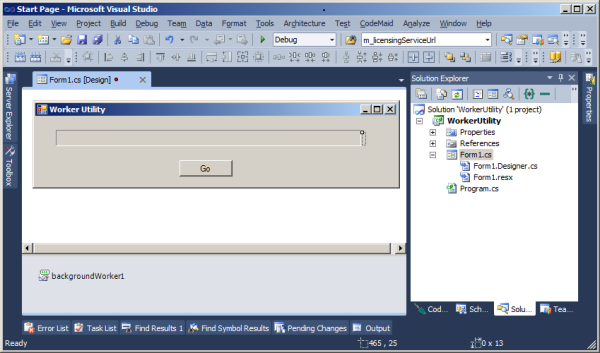 Set the following properties on the background worker control

Double click on the “Go” Button and setup the following Code

Performing the Work and Raising Events

I am going to simulate processing a 126 items @ Random number of seconds between 0 and 2 seconds, by looping and pausing the background thread. You could be doing anything in the processing block, for example, read data from the database loop through the rows and perform file system tasks based upon the data?

I will be performing work but each time an item is processed I want to tell the UI thread so that it can update the progress bar. To do this I will need to use events and I am going to create some custom event args.

I will encapsulate the logic in a class called Processor.cs. Create a class as follows:
This will house the event handler and raise events back to the UI thread

The main point of Interest in the following code is the creation of the event handler on the page with a delegate method declaration and an event handler. The RaiseEvent method is called on each file that is processed.

Now we need to set up an event handler in the main form so we can update the UI when the event is raised.

On the Background Worker Switch to the “Events” properties and double-click on “DoWork” to create the “DoWork” event handler.

Go to the _DoWork event handler and change as follows:

So this is where the tricky bit comes in. We need to implement the _ProgressUpdated callback.
If we were to go directly to update the UI, we would get a cross thread exception and the program would crash.

If you check the InvokeRequired method it will return true in this scenario so we need to perform a cross thread call to get from the background worker thread, that the “ProgressUpdated” event is raised on, to the UI thread to make the changes in the UI.

This is done as follows, firstly you need a delegate for the method invoke method callback and an Update Method to handle performing the UI Update.

Here is the full working code sample in a VS2010 solution.
WorkerUtility